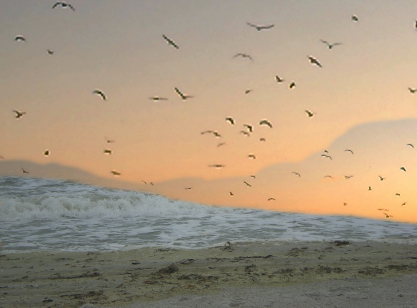 The sky was just blue; nothing interrupted the hue. Then she appeared, out of some invisible hole in the atmosphere. Her white wings flapped above the ocean's waves in an urgent rhythm until they landed her feet upon the sand. The sky was empty again, until another bird adorned with sleek black and yellow feathers appeared from above, and from nowhere. He took his place beside the first bird as she watched the sky, acknowledging his presence with a slight tilt of her head in his direction. Together they watched the sky produce the flock, individuals coming at increasing frequency, just a few seconds now between appearances. Each one landed on the beach, the gathering growing to hundreds of birds within an hour. The afternoon grew restless, as the breeze became a rush of brine-infused, whipped air. The waves produced foam, and the beach disappeared. The flock took shelter in the mangroves and grey clouds took over the horizon.

"Watch nature," my grandfather taught me. It will show you how to be. Nothing truer has ever been, to date, for me.